Seymour "Sy" Parrish (Robin Williams) is a photo technician at SavMart's one-hour photo developing clinic. He leads a solitary life outside of the "heaven-like" hyperreality atmosphere of the department store. Every day he labors to ensure his customers get the best quality photos possible. His work is his life, as he has no one and nothing to go home to at the end of each day; he spends his evenings sitting alone in his barren living room, watching television. His favorite customers are the Yorkin family: husband Will (Michael Vartan), wife Nina (Connie Nielsen), and their son Jake (Dylan Smith). He has developed their photos for years and has developed an obsession with the family. He idolizes their happiness and affluence, memorizing every personal detail about them.

Sy secretly makes his own copies of the Yorkins' photos from the film negatives and then puts them on a wall in his apartment in a massive collage. He fantasizes about being a member of their family and sharing in the love he assumes they feel. He is painfully shy and socially inept, however, and his attempts to become closer to the family are gently rebuffed. Sy eventually manages to spark a connection with Nina when he pretends to be interested in a book he noticed she purchased in the store. Nina asks Sy personal questions about his life, realizing that he is a lonely man, something only Jake had noticed earlier. The next day, his boss Bill (Gary Cole) fires him for a large amount of inexplicable additional prints. While inspecting his photos for the last time, Sy discovers that Will is having an affair, and his idyllic conception of the Yorkins as the "perfect" family is shattered. Sy surreptitiously places photos of Will and his mistress, Maya Burson (Erin Daniels), into a packet of photos that Nina was scheduled to pick up at SavMart, in order to make her aware of her husband's infidelity.

Sy comes to hate and envy Will, who has everything Sy longs for, yet does not seem to appreciate what he has. Sy follows and takes pictures of Bill's young daughter, and sends them to Bill as a threat. Yoshi, another employee who works at SavMart, discovers the pictures and turns them over to Bill, leading to a police investigation against Sy. While detectives Van Der Zee (Eriq La Salle) and Outerbridge (Clark Gregg) discover Sy's obsession, Sy confronts Will and Maya during a rendezvous in their hotel room. Armed with a knife and a camera, Sy forces the lovers to pose naked in sexual positions while he takes pictures. After the confrontation, Sy discovers that the police have arrived at the hotel and he attempts to escape. Inadvertently leaving through an emergency exit, Sy trips an alarm and Van Der Zee pursues him while Outerbridge discovers Will and Maya, physically unharmed but deeply traumatized. The police apprehend Sy in the parking garage as he attempts to make a break for his car. Upon being arrested, Sy claims, "I just took pictures."

Van Der Zee interrogates Sy and asks him why he terrorized the Yorkins. Sy states that he can tell Van Der Zee is a good man, and not the sort of father who would take "disgusting, sick, degrading pictures" of his children doing "things that children shouldn't do". (The implication, confirmed by Romanek, is that Sy's father exploited him for child pornography.) Sy then asks for the pictures he took at the hotel, which Van Der Zee has described as "evidence". They appear to be only shots of objects and furnishings of a hotel room. The film closes with an "imagined" family picture of the Yorkins with Will's arm around a smiling Sy.

I had some screenings for friends and filmmakers, but I will say that the Coppola note was the most impact note because he took a look at a rough cut and he said to me, “Is the film a thriller or is it a character study” and I said, “Well, that’s hard to answer.” I said, “Sort of a thriller, sort of a character study.” And he said to me, “There’s no such thing as sort of a thriller.” What he suggested was the film was a character study, but that it was in the guise of the genre of a thriller, and that he felt it would be helpful to set the film very clearly for the audience in the mode of a thriller so they felt comfortable with the type of film they were about to see. He said, “Then you could slip the character study in on them,” and I thought that was a brilliant note. What’s great about that is that it’s not subjective. It’s not, “Well I would have done this.” Or, “Why didn’t you do it this way?” It was more like, “Here’s a way to structure your film that will help the audience engage with it and take it or leave it.” Because the film was originally just linear, and what we did is we put that scene of Sy having already been arrested and being about to be interrogated [at the beginning]; then you understand that you’re watching a film where someone did something really bad and he was arrested for it, and he’s a little off. You realize the stakes of the film are such that it’s going to reach that point, and then we went back to start the film from the beginning and that was entirely Coppola’s influence.

Mise-En-Scene - "Someone wants you to be happy" 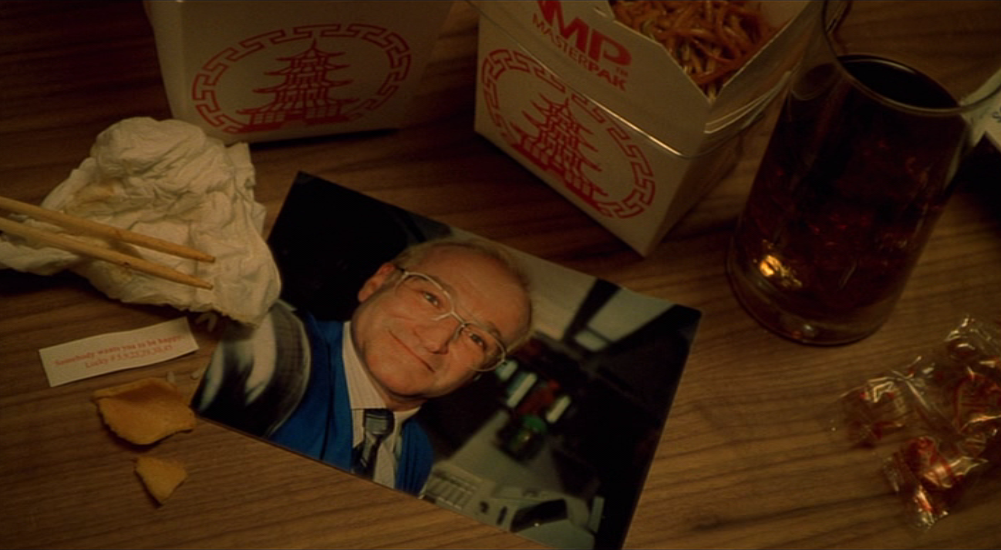 Here is an example of how Mise-En-Scene can be very effective in revealing and foreshadowing subconscious information to the audience.

The FORTUNE COOKIE says, 'Somebody want you to be happy'. Then we see the photo of Sy that he self took. This photo is tossed down on the coffee table, which indicated to the audience that Sy is someone that is not important to the family. However, this frame that is revealed to the audience will actually foreshadow events that will take place late in the narrative.

Discuss how mise-en-scene is employed by the Director using this frame.

Effective use of mise-en-scene 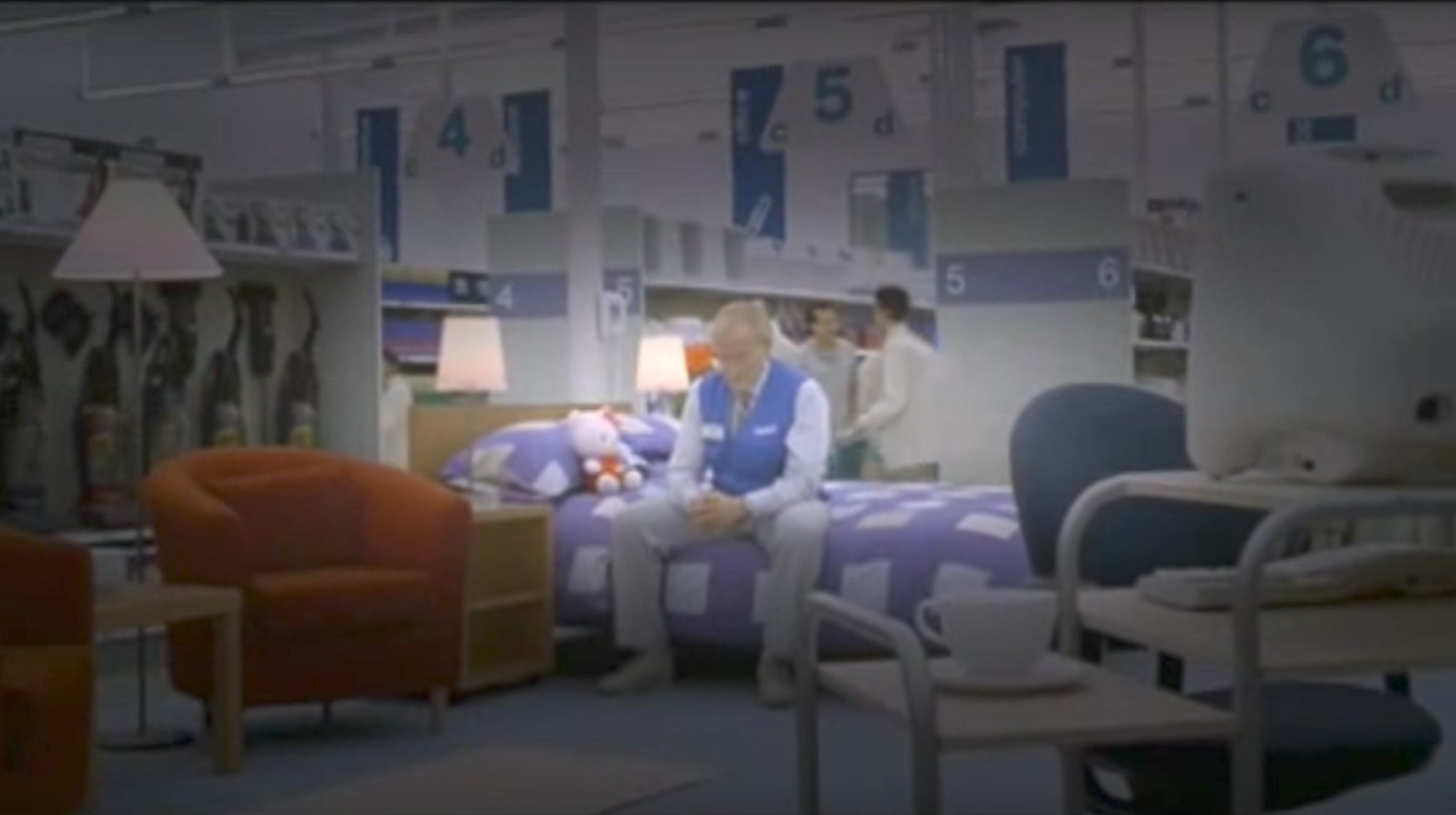