A film text produced and distributed in 2017 that represents the ideology of Race in America.

Chris (Daniel Kaluuya) and his girlfriend, Rose (Allison Williams), have reached the meet-the-parents milestone of dating, she invites him for a weekend getaway upstate with Missy and Dean. At first, Chris reads the family’s overly accommodating behaviour as nervous attempts to deal with their daughter’s interracial relationship, but as the weekend progresses, a series of increasingly disturbing discoveries lead him to a truth that he never could have imagined.

Rose keeps her white milk seperate to her coloured cereal

Get Out, uses props as a component of Mise-En-Scene to reveal the ideology of race to its audience. Here is an example of this. Rose keeps her white milk seperate to her coloured cereal. This is an intentional frame that Director Jordan Peele reveals to the audience. The close up of the coloured Fruitloops and glass of white milk allows the audience to see that Rose’s character has the ability to keep these things seperate. She then takes a sip of the milk through a black straw, another example of the implied ideology of race. Audience’s gather their thoughts around this and come to the conclusion that America, may still be divided by colour and that race is still an active part of their cultural landscape. 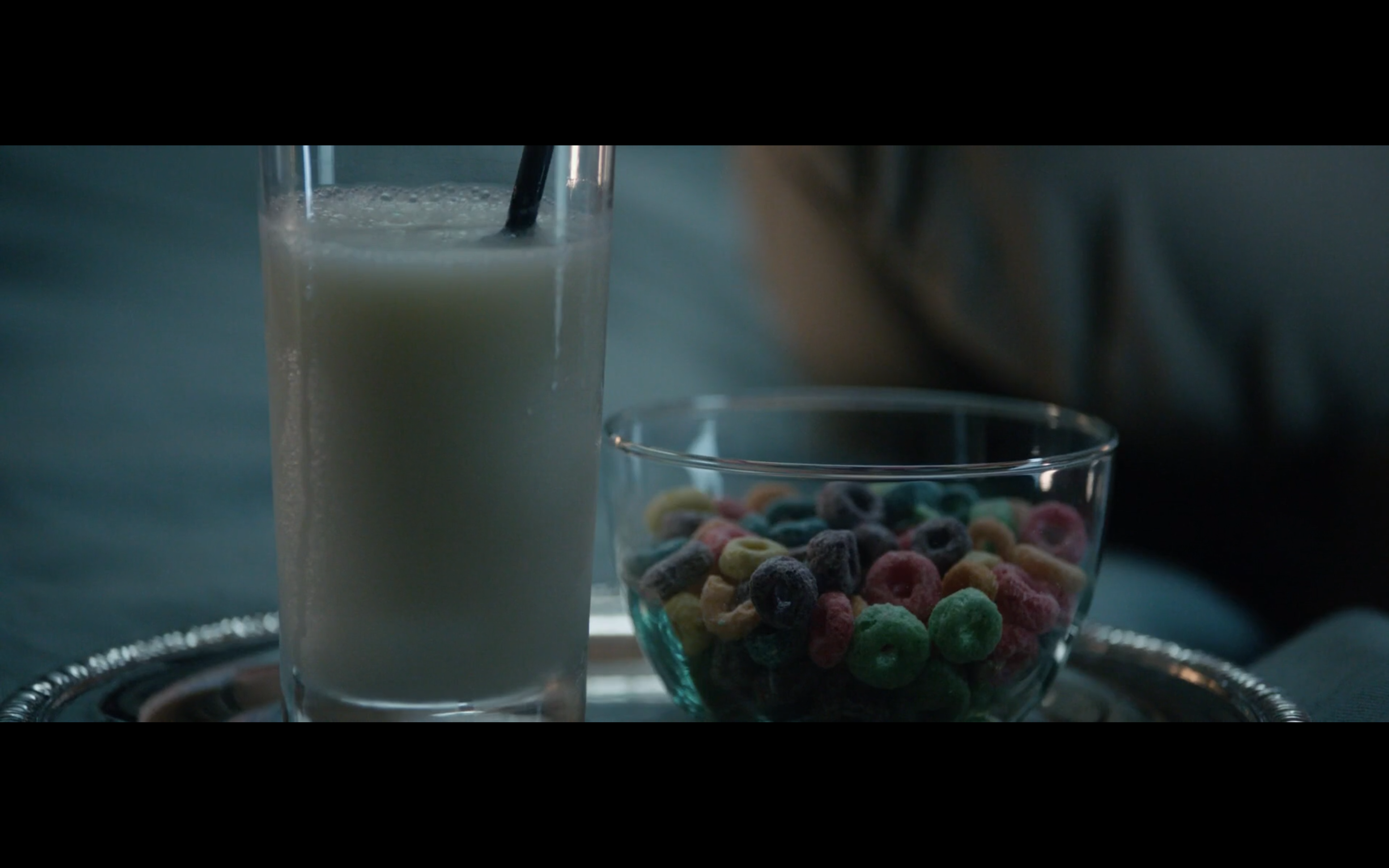 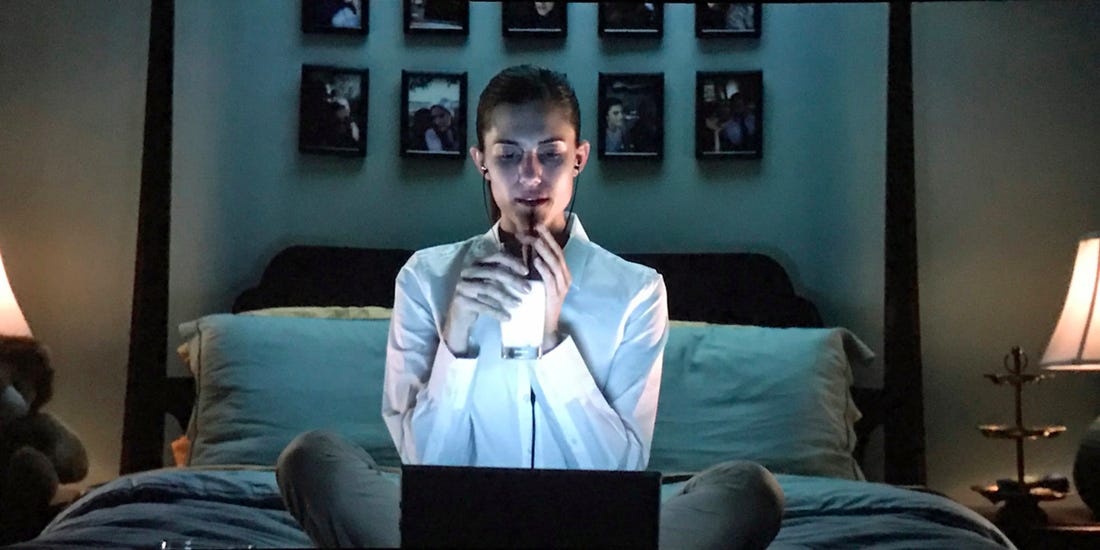 How Costume in Get Out helped tell the story

Rose played by, Allison William’s reflected a typical preppy, slightly naive American girl. Costume designer Nadine Haders wanted to make Rose look young and give her an easy-going, effortless vibe. She wanted her character to come across to the audience as approachable and couldn’t be thought of as strange like the rest of the characters appeared at first site. The first time Rose is introduced to the audience she’s in a denim dress and this was very purposeful. Denim represents the All-American girl. In fact for most of the film both Rose and Chris are portrayed to the audience as the All-American couple, constantly being seen by the audience wearing a combination of red, white and blue colour schemes. 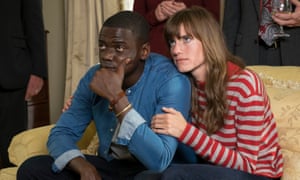 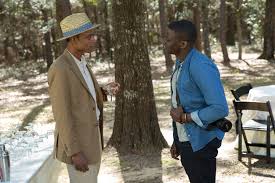 Red was a very important colour in the film because it is symbolic of secret societies.

All of the Armitages and their guests wear red, which is a symbol of their secret society. Red, of course, is associated with blood, and they don’t mind spilling lots of it to get what they want. Chris, however, wears no red whatsoever and this is one of the things that marks him as an outsider.

The scene at the family gathering we see the motif of the colour red being a representative of the hidden society. Everyone at the party is wearing something red, while Chris is wearing blue. This represented his status as an outsider and the ‘us verses them’ mentality. 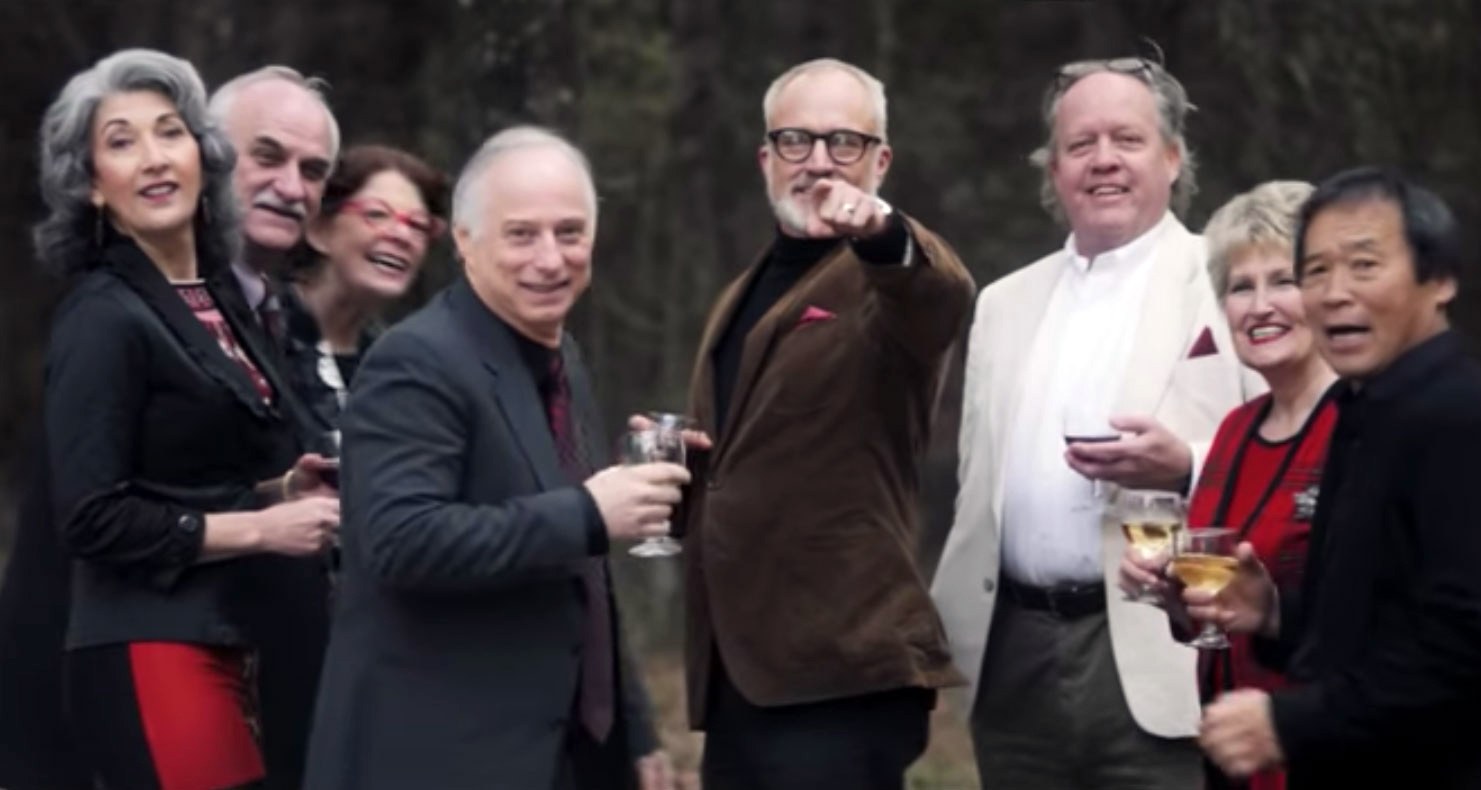 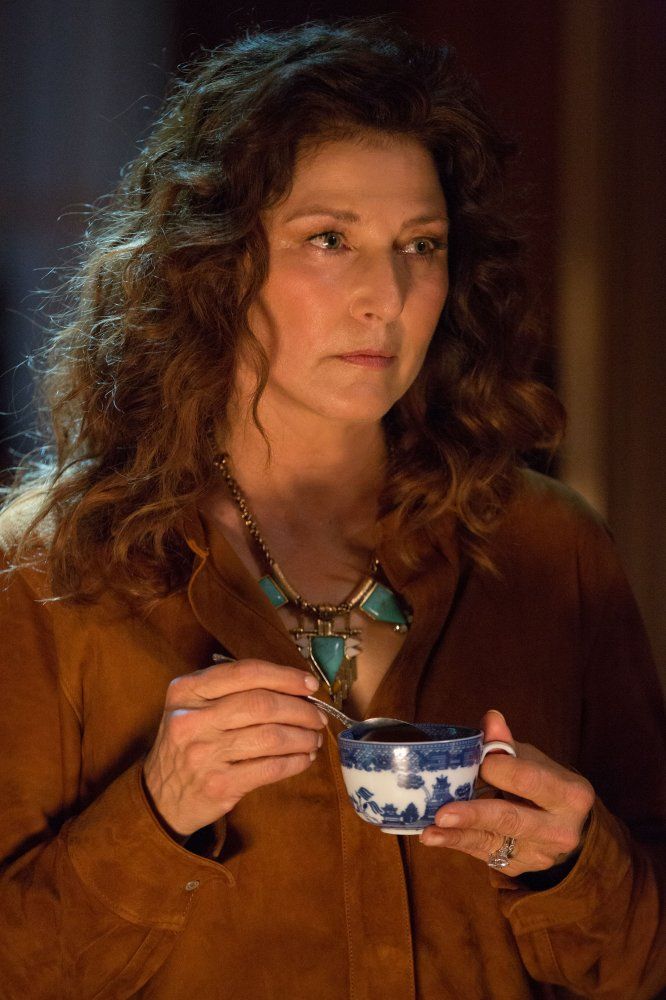 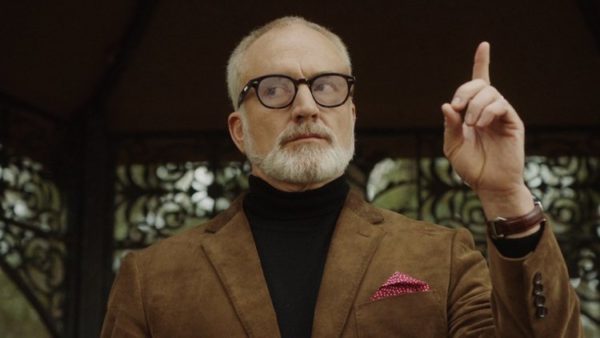 Audience’s are exposed to the colour brown at various times through out the narrative. The colour brown represents earth and grounded nature. When we are introduced to characters wearing brown we the audience are meant to fill a sense of being grounded by nature. Perhaps a reason why costume designer Nadine Haders has both Rose’s parents wearing brown in climatic scenes in the text. This can amplify conflicted attitudes from the audience and ensure they align with the Horror genre. 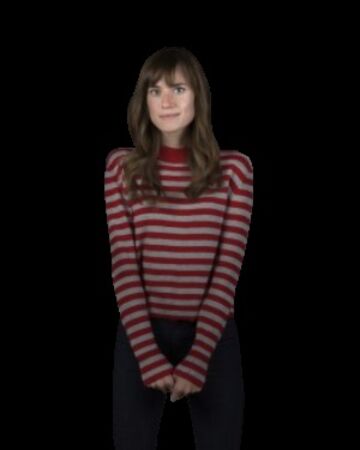 How Sound and Score made an impact in Get Out

So the main title is called Sikiliza Kwa Wahenga. That means “Listen to the elders” in Swahili. The voices are meant to represent the departed slaves and lynching victims. They are trying to reach Chris, the lead character, and speak to him from beyond. The use of Swahili is so we hear an African language in their tone yet we don’t hear the exact words they’re saying because the dead speak to us through imagery and emotion.

The film had  them say things in Swahili that they would be saying if they were trying to warn him. That’s what the phrases are. The translation is, “Brother, run! Listen to the elders! Listen to the truth! Run away! Save yourself!”

Sikiliza Kwa Wahenga - Main Title in Get Out

Opening Scene in Get Out

The rabbit represents black people persecuted by the farmer, the allegorical white race. This foreshadows that the Armitage family will try and catch Chris. The metaphor of Chris as the rabbit is strengthened by the fact that the Armitage’s serve a carrot-based dessert, carrot cake to Chris on his first visit to the house. Chris’s desperate flee from the house at the resolution of the narrative parallels the rabbit’s flee from the farmer.

Jordan Peele turned what looked like an innocent game of silent bingo in something malevolent. The Bingo Game at the party represented something very similar to how slave auctions were conducted in 1859. Audiences later discover that the silent Bingo Game was in fact a bidding war for the film’s protagonist Chris. 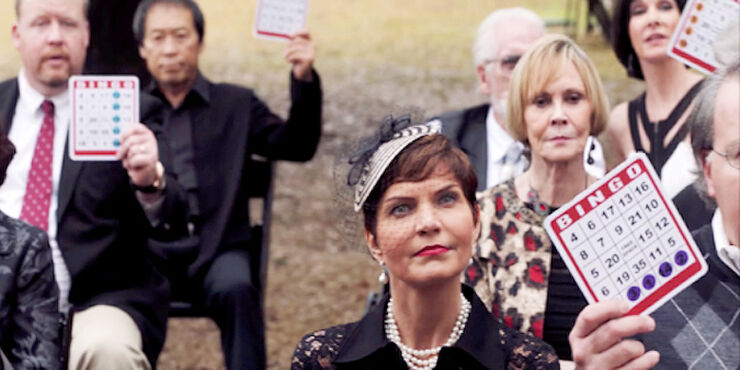 Was cotton an intended symbol?

As Chris is tied up in the basement and under hypnosis, he gets an idea from a rip in the arm of the leather chair. He pulls out the cotton and carefully studies this material. A closeup and extended shot allows the audience to see exactly what Chris is thinking. Little do they know he will stuff this in his ears to prevent him from hearing the tap of the tea cup. The ‘cotton’ symbol did not get lost on viewers as the irony of this particular material represents the ideology of race. This might be the only time where a Black man picking cotton has been a lifesaving task.

The tea cup and spoon is the object Rose’s mother Missy uses to hypnotise Chris. Audiences recognise the ‘silver spoon’ as a figure of speech to describe being born with privilege.

However, the casual stirring of the silver spoon in a tea cup not only develops into a centrifugal force of terror but bears important symbolic meaning. For one, the teacup is symbolic in that during the U.S. slavery era, white wives of slave owners would use a gentle strike to their teacup to summon house slaves. 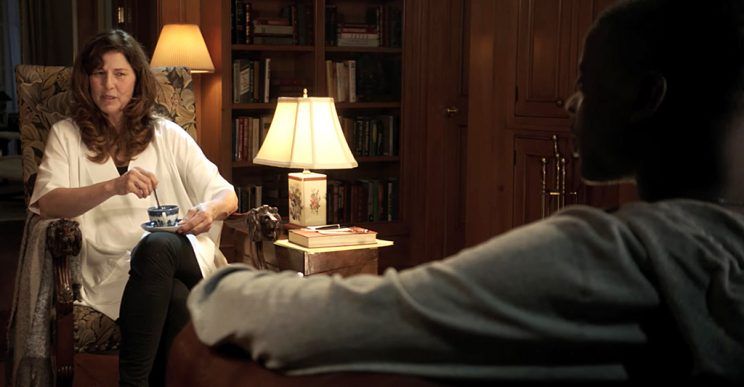 The deer shows up multiple times in the social thriller as a metaphor for modern-day racism. For example, it’s on the wall of Rose’s (Allison Williams) parents’ home, where she’s just brought her boyfriend, Chris (Daniel Kaluuya), for the weekend. A deer also appears in the first moments of Chris’ first trip to the “Sunken Place” while being hypnotized by Rose’s mother.

There is a whole dynamic and parallel in Get Out between the deer, Chris and Chris’ mom etc. Get out was written so brilliantly that there are multiple layers to each metaphor.

Additionally, the deer that hung above Chris’ head looks like a hunted trophy which shows how the family sees the black people they kidnapped, merely as trophies. However, the fact that it hung above him could also symbolise white dominance.

It is very ironic that Dean was killed by this buck. The very thing which represented his hate for African Americans was the object that killed him.