Remember all examinations are modified. Therefore what you received in your SAC's can either go up or down depending on how you went in the exam.

My advice is GIVE IT YOUR ALL......ALL YEAR! Don't just wait for the exam.

Make sure you do this in and after READING TIME

Read the entire paper – INCLUDING THE BACK PAGE. This often has assessment criteria for your two extended responses in Section B. You can use these dot points as suggested topic sentences and paragraphs. Let the dot point guide your discussion for each extended response. They will also give you media language to integrate into your questions.

Look below for examples from the last two Media exam papers…..

Immediately after reading time I encourage all of you to plan each question. This takes the pressure off you when you start each question. Students who have done well, will write a mini plan with key words, case studies, text examples and code and conventions for each question. YOU WILL HAVE TIME TO DO THIS. Anything that takes stress away gives you time. 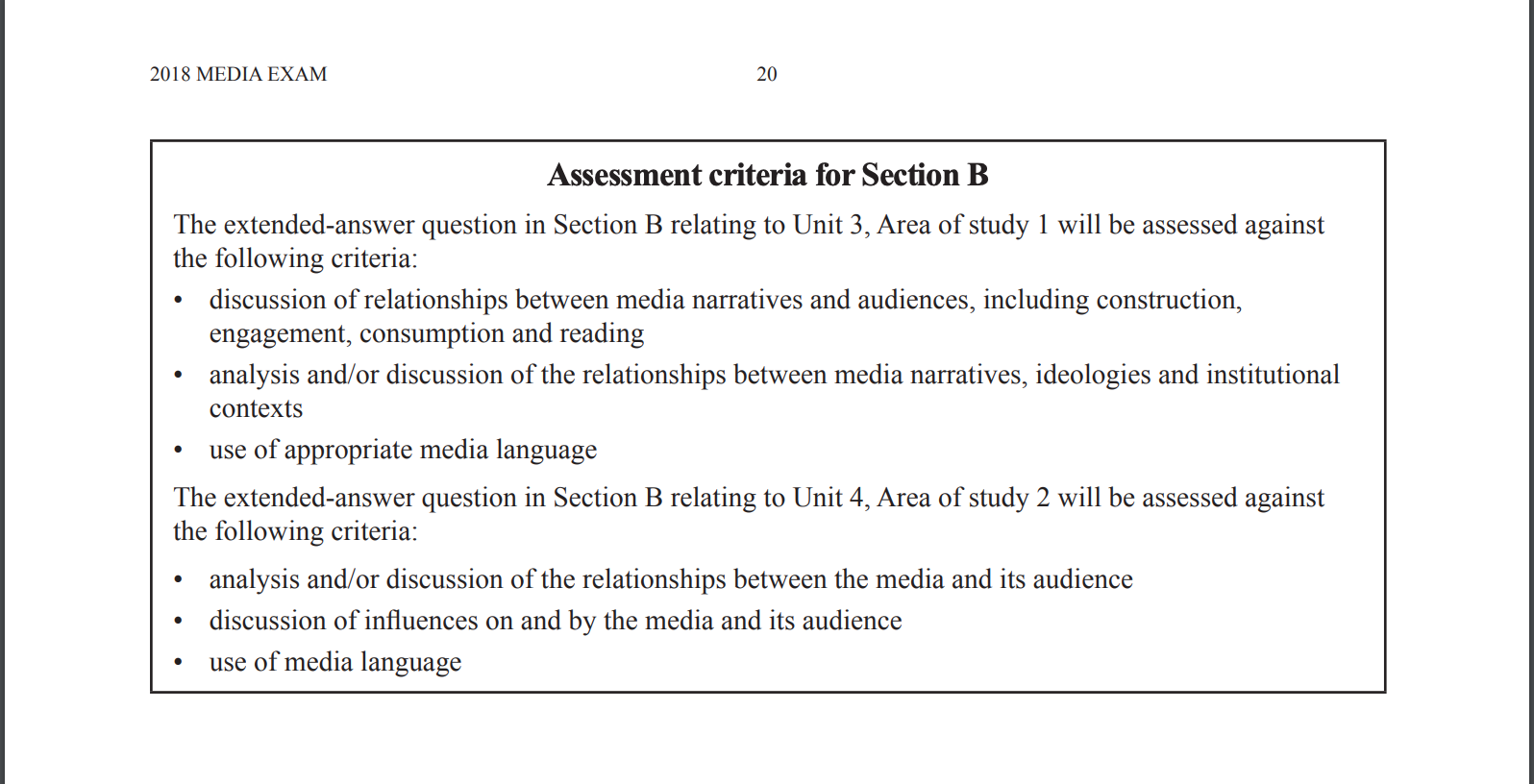 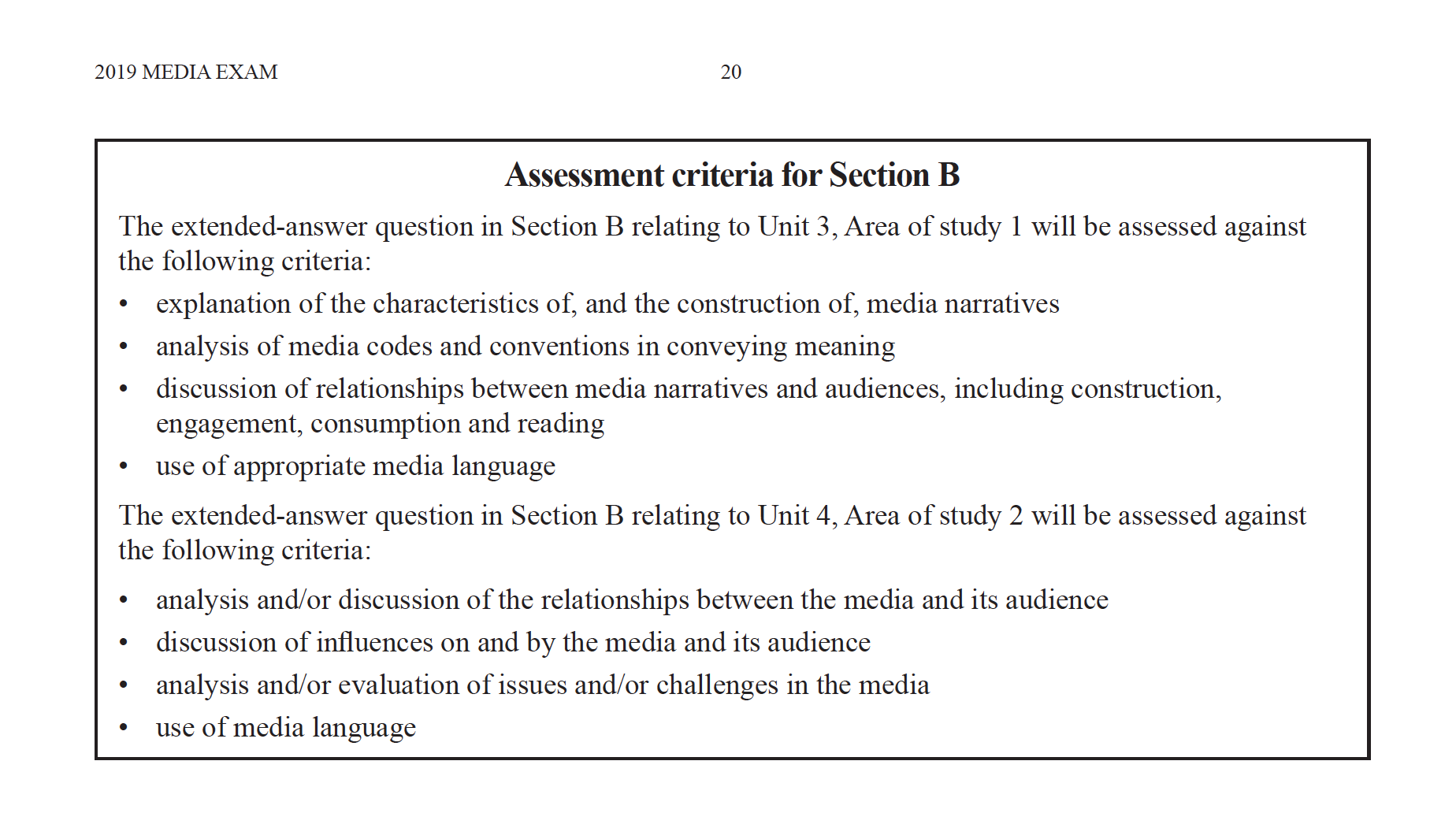 For Section A: All students will be required to complete a range of short and long answer questions ranging in marks value. For this section you will be asked questions relating to the following areas of study:

In Section B of your exam you will be required to complete TWO 10 mark questions in Essay format. One question from each of your theories of work that you studied this year - Narrative & Ideology and Agency & Control. The biggest advice I can give here is to plan each of your essays before you being.

Agency & Control
The media has always been considered to have the capacity to influence, but these days the balance of power is changing and arguments about who can influence an audience and a market have become highly contested. Discuss how the change in methods of production, distribution, consumption or reception of media products has changed the extent of media influence.
- 10 marks -

HOW TO STRUCTURE A RESPONSE FOR: Narrative & Ideology SAC & EXAM questions

Remember Assessors mark UP, so make it easy for them to find marks. And GET TO THE POINT QUICKLY. Don’t have them assume what you are saying. USE MEDIA LANGUAGE

1. Open with a strong, impactful and direct sentence. DO NOT re-write the question in your open sentence.
2. Outline how you plan to attack the question. Here you can list the Ideology, the Text, the Year produced and Country it was distributed and or the Code or Convention you will be discussing. DO NOT do all of these. Make sure you identify what the question is asking and provide an easy interpretation for the assessor to know where you are going with your response.
3. Discuss or outline your text example, making sure you use media language when discussing the code or convention you are referring too.
4. Be sure to identify your audience and have a discussion about, linking your text example to their engagement, experience or expectation. Make reference, to the time period and society your text was produced, consumed and distributed. (Again depending on what the question is asking)
5. Depending on the mark loading will depend on how many text examples and code and convention examples you will need to reveal.
6. Conclude your response. Again provide a tight sentence that is punchy and leaves the response proving you are a sophisticated student. DO NOT waffle or re-write the open sentence.

How to write your Media Production Process questions

QUESTION:
Describe how you intended to engage the specific audience for which you designed your media product.
All media products are designed with an audience in mind. All creators of media ensure they are implementing the code and conventions aligned with their media form.
-3 marks-

For example:
The use of white space was the centre of my composition of my photography sequence. I understood that by using a large amount of white space above my object allowed my audience to focus on the main attraction. It gave depth to my final product and allowed the eye of my audience to feel the empathy for my portrait.
The convention of sound, in particular non-diegetic was the focal element to my moving image. The use of foley was included in the post production stage of my creation to enhance the mood and give life to the narrative for the audience.

QUESTION:
Describe how the media codes and conventions that you explored were applied in your media production design. In your response, refer to narrative, genre or style.
-6 marks-

This response requires you to use media language and describe how the code and conventions you revealed were applied to your folio and link this description to one of the following – Narrative / Genre or Style. You could discuss two of these if you wanted to. It wouldn’t get your more points but some students will find it easier for a six mark question to look at two.

For example:
While images and fonts communicate a message, white space can be used to enhance and clarify the important information. You’ve probably heard of the phrase ‘less is more’? Well, it’s almost always the case when applied to design. I found this relevant to my media production design. I was able to identify that the convention of leaving negative space above my portraits allowed the narrative of grief and loss to be explored by my audience.
White space funnels your eye towards the content and allows your message to stand out. Clarity doesn’t mean boring design; rather a strong design will speak for itself rather grabbing for the audience’s attention. I wanted my audience to experience the emotion on the portraits face, to express the narrative of, ‘hard, mysterious life’. I felt by leaving an amount of negative space the portraits eyes amplified their grief, therefore propelling the narrative to the audience.
For example:
Non-diegetic sound was a convention that I relied on to propel the narrative and inform the audience that my short film’s genre was a psychological thriller. Audience expect to hear certain sounds when presented with the thriller genre. The use of a waterphone was a foley sound that I researched in the development stage of my media production design. Evidence from my concept testing revealed that when humans heard the waterphone they immediately referenced, scare, isolation and intimidation. All of these adjectives align themselves perfectly with the psychological thriller genre.

QUESTION:
Explain how feedback processes used during post-production helped you refine your media product.
Audience is one of the most important considerations when planning a media product. Concepts are just ideas until they reach an audience and the impact you intended is realised. Understanding the audiences’ knowledge of your subject matter is fundamental to forming a clear picture of whom will be consuming and enjoying your media product and essentially the narrative you wish to tell.
6 marks

In order to gain advice from my audience I put together a series of questions around my media production. I printed several screen shots that I took of my short film and allowed my audience to sit with each image for three minutes before revealing what their suggestions were. At this stage of the feedback cycle I didn’t provide any sound to audience. I wanted them to sit with the visual without having the hearing sensory. I then asked the following question, “What sound do you expect to hear? And what emotion will this draw your attention too?”.
After collating eight responses to all my six screen shots I discovered that some of the sounds I was planning to use in my media product did not align with my audience expectations. They wanted to hear something different or in fact hear nothing at all. They wanted the, ‘less is more’ impact. I was then able to go back in post-production and edit out the unnecessary sound, which in turn created a deeper impact of my audience.

Describe how you intended to engage the specific audience for which you designed your media product.
(3marks)
The designed media product of a promotional style, moving image video was created to promote new cliental to a dance studio in Geelong and the surrounding region. Varying codes and conventions were employed to attract and resonate with the target audience of males and females aged 12-30 engaged who are engaged on an online forum. Such techniques include the use of varying transitions and non-diegetic music to enhance overall audience engagement. The ability to connect visual elements such as transitions and speed ramping to audio elements and variations to the moving image has the capacity to draw in the audience's attention to particular moment in the film, the repetition of this technique attempts to ensure the audiences engagement is maintained throughout its duration.

Describe how the media code and conventions that you explored were applied in your media product design. In your response, refer to narrative, genre or style.
(6marks)
The designed media product of a promotional style, moving image video was created to promote new cliental to a dance studio in Geelong and the surrounding region incorporated differing codes and conventions to ensure maximum audience engagement and reception. Visual effects such as composition techniques were employed to convey the narrative and ideology of empowerment in a positive social environment. Variations in close up, wide angle, low angle and eye level shots were used in each sections of footage to emphasize differing aspects of a subject. The ability to alter the distance, tone and focus of a frame places greater emphasis on a subject to highlight differing shapes and angles that dancers are able to create, thus explicitly depicting to viewers the intention of the promotional video and the hidden ideology. The non-linear compilation of footage that are assembled together during post-production intended to display the structure and style of the moving image where fast and varying transitions were utilized to align with the features of a promotional video that aims to maintain audience engagement throughout its duration.

Explain how feedback processes used during post-production helped you refine your media product
(6marks)
Feedback was a significant element to altering and refining my media production of a promotional style moving image. During the post production stage my target audience of males and females aged 12-30 who have an interest in dance and movement, as well as the given studio director, were shown a draft of the production in order to insure the final production incorporates numerous engaging visual elements that aligns with the studio's values. Throughout the editing stage, the designed audience were given a qualitative survey evaluating their perception of the overall engagement of the promotional video. The target audience indicated that greater connectivity between the diegetic music and the movement in all stages of the production to enhance audience engagement and attraction to the footage presented. Therefore, the feedback received during post-production allowed alterations during editing such as the transition of speed ramping where a specific subject in the frame is linked to the variations in the score.